3
The Introductory Stage (aka Basic , Checkpoint 0, or Start) is the first checkpoint that appears in Classic, Training, Mayhem. It acts as the game's tutorial. This checkpoint has been in all public versions of the game.

This area contains three segments, and once completed the player enters Checkpoint 1.

Since it is the first checkpoint in the game, the introductory stage is very easy compared to other checkpoints appearing later on. The glass obstacles here pose little difficulty, except for a few, tricky Sliding Glass Panes.

Add a photo to this gallery

This checkpoint introduces the basic mechanics of the game. During the first segment, notifications will appear to inform the player about firing balls, crystals, and Multiball. A notification also appears if the player crashes into an obstacle.

In the Introductory stage the player will first encounter crystals in their basic form; pyramid-shaped. The first glass obstacles are also found here, although only two types are introduced. Long glass bars are situated at various places, and sliding glass walls are common.

The first power-up is also found in this checkpoint - midway through the third segment, the first Infinite Balls power-up appears, followed by six pyramid crystals placed in a row. 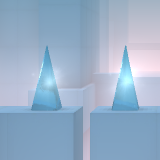 Add a photo to this gallery

The introductory stage contains three stages. They are not very difficult, and act as the tutorial for the game.

hit 10 crystals in a row = multiball

Out of Balls
Add a photo to this gallery

Infinite Balls are debuted in this checkpoint.

Mediocre posted a blog "First screenshots of Smash Hit!". One of the screenshots had blue-colored Sliding Glass Panes being smashed.

It has its own page, called Introductory stage (Teaser).

The same (fake) stage was used in the Smash Hit Gameplay Teaser.

Smash Hit Gameplay Teaser
Add a photo to this gallery

Retrieved from "https://smashhit.fandom.com/wiki/Introductory_Stage?oldid=16605"
Community content is available under CC-BY-SA unless otherwise noted.